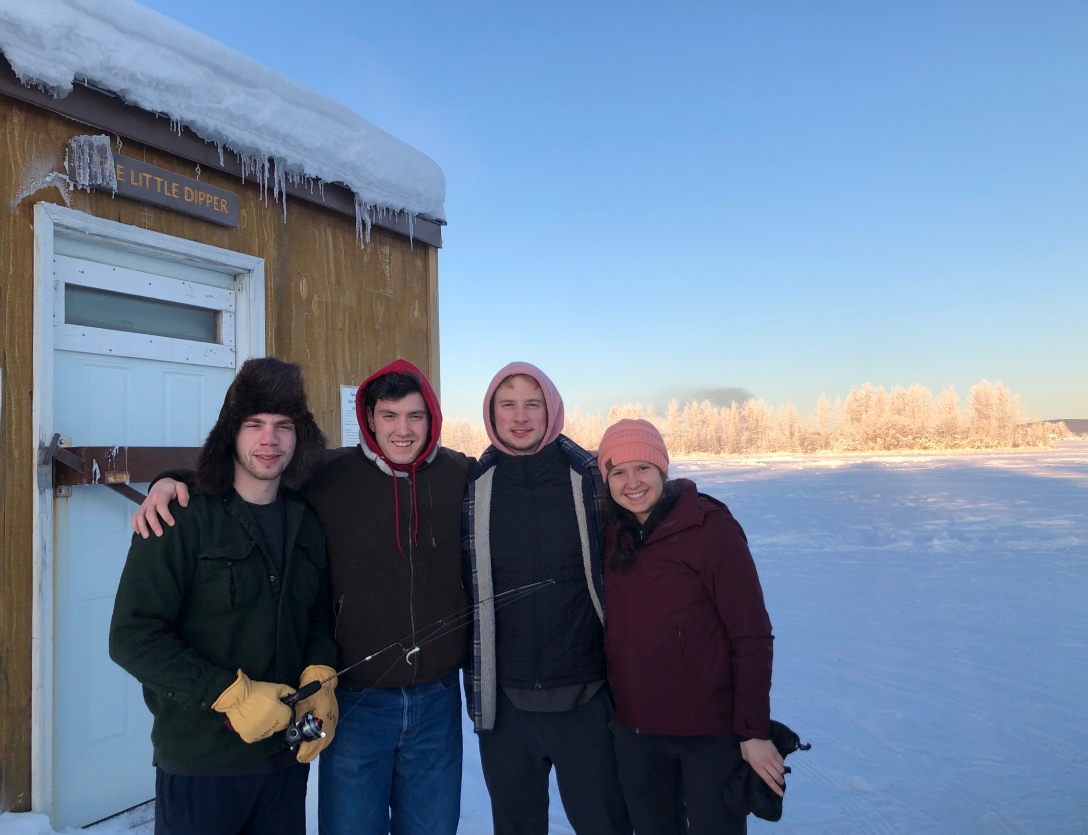 “It’ll be fun!” the teenagers told me.  “We’ve figured out a fishing hut on the Tanana Lakes!”

After a four week stretch of temperatures hovering near 400 below in Alaska, cabin fever had firmly entrenched itself.  All of us were weary of slouching around the house.  Now they were suggesting a different type of cabin for diversion:  an ice fishing shack.

Not much of a fisherwoman myself, I was immediately skeptical.  In summers past, my family had persuaded me to go “combat fishing” in the Kenai River for salmon, standing shoulder to shoulder in the blue green water while the fish slunk around my waders.  Despite all patient instruction, I succeeded only in snagging my fishing line on rocks lining the riverbed and casting about in all the wrong directions.  It wasn’t long before I gave up, opting to sit in our boat, poured the hot water designed for our coffee thermos over my frozen toes, and munched on goldfish snacks.  Later in the summer, my family once again convinced me to go fishing, this time a halibut charter in Kachemak Bay.  This should be easier, I thought, when I saw the well-equipped boat in Homer’s harbor, fishing poles lined up already against the railing, bait attached, guides at hand to help.  Not long after we left the relative calm of the bay, however, the swells surged, rocking the boat wildly, and more than one of us leaned over the railing, upchucking our breakfasts.

Maneuvering to the edge of the expansive lake, I surveyed the fishing “huts” scattered across its frozen surface.  They ranged from primitive tents set up over self-drilled holes in the ice to campers to wooden structures complete with a wood burning stove, smoke curling upwards. Our particular exemplar, a wooden shack, stood in the middle of the lake, having been dragged out across the ice earlier in the winter.  I eyed the ice, thicker at the edges of the lake, and took courage from the fact that other vehicles had already driven across safely. 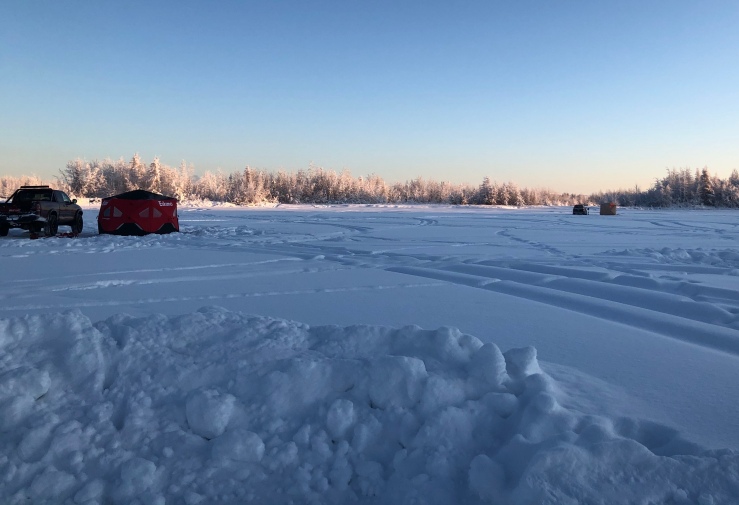 Inside, the hut was furnished with just the basic necessities for ice fishing.  It was dimly lit because of its lack of windows but warmed from the wood stove the boys fed with logs.  The wooden planks of four corners of the hut had been removed, exposing the ice below, and drilled into this were four fishing holes.  All in all, the effect resembled an outhouse.

The teenagers had already started fishing, each facing a corner, dropping lines into the holes.  Light shimmered from below, casting an eerie glow into the dimly lit hut.  Far below the ice, whitefish and rainbow trout and arctic grayling swiveled, dodging the bobbing lead weights which the boys had hooked with salmon eggs.  Every so often, they used a ladle to break up the ice crust forming over the fishing holes.

I settled myself on a metal camping chair to await the result of their efforts.  After an hour passed without a single tug on the fishing line, I started to question the whiteboard tacked onto the wooden wall onto which previous hut inhabitants had recorded their successes. On January 6 someone caught over 120 fish using small rubber jigs.  On January 14 three people caught about 100 fish between them, using shrimp as bait.  Perhaps we had picked the wrong time of day?  Or were dropping our lines too low?  Or maybe the fish were just outsmarting us.  And then, of course, I pondered the wisdom of this catch-and-release sport…

When I grew stiff from sitting, I left them to their ruminations about how to best hold the line, or to switch out the bait, or to change the music to Taylor Swift, in case that was more along the acoustic preference of the fish.  Outside, after the gloom of the hut, the sun was bright on the snow-covered lake, the air still and crackling and cold.  My walk, though not long in the subzero temperatures, took me a distance across the lake.  I looked back towards the fishing huts, quiet and tranquil. In the end, the kids managed to catch a multitude of fish that day. Once they properly determined the right bait and depth, they caught fish after fish while I, once again, did not hook even a single one. Fishing may just not be my sport, I conceded. The white silence on the lake that day, however, was enough for me to join in on yet another fishing venture anytime.