“I managed to get a road permit into Denali National Park!” I said to the kids, both home from college for the summer. “Let’s drive to Teklanika.”

It was a fantastic opportunity to see wildlife up close. Having lived in Alaska for many years, the possibility of seeing wildlife was always present. But in the park the experience was different. The area covered six million acres. A vast wilderness unchanged by humans. A single road wound its way back into the depths of the park. In an effort to limit interactions between wildlife and humans, the road was only open to sightseeing buses that drove in at regular intervals. Every so often, park officials hosted a road lottery, allowing winners to drive into the park in private vehicles as far as time and weather permitted. Naturally, having secured one of these sought-after permits, we brimmed with excitement.

We camped near Riley Creek. Sitting around the campfire that evening, we made plans for our drive into the park. We would pack binoculars and hiking shoes and a picnic. Our friends Wes and Tara, who had driven the park road before, told us stories about grizzlies and their cubs that walked right up to the park road. Unencumbered and free, moose strode through the taiga forests. Caribou migrated across the tundra. Wolves roamed in packs. We squirmed with anticipation.

“You just need to keep your eyes peeled on the landscape,” Wes told us.

Earlier, we had walked along a trail near the campground. Ground squirrels chattered and snowshoe hares scampered. With effort we held back our dogs. Beyond a bend in the trail, we caught sight of a huge porcupine waddling along in front of us. If this was a preview of what tomorrow held in store for us, we were in luck!

The next morning, grey rainclouds scuttled. The air was brisk. It was early in the season. We noticed that the souvenir shops at the “glitter gulch,” a strip of hotels and eateries near the park entrance, were still boarded up. Plywood covered the windows and the boardwalk in front of the shops was deserted. The tourist season had not yet begun.

But we thought little of it as we piled into the car. We disregarded the forecast that warned of sleet in higher elevations. Typical of Alaska, it could be sunny one moment and wintry the next. We were not going to let the weather hamper our adventure. Fifteen miles into the park we stopped at the ranger station near Savage River to present our permit. Beyond the river, the vast, heretofore unreachable park beckoned.

The gravel road wound its way through an immense landscape that unfolded before us. We kept a look out for Denali, the highest peak in North America, which could present itself in its majesty if we looked west. But the mountain, elusive as it was, had its own weather system that kept it shrouded from view today.

Snow patches still lingered in the tundra. Mountain peaks towered, making us feel miniscule in our surroundings. Gazing out of our respective car windows, we scrutinized the spruce thickets and alpine meadows and creek beds for movement, a possibly signs of wildlife.

Tara kept up a quiet chant: “Come out, Mr. Bear, let us see you.” But an hour later we had still not seen anything. Were the bears still hibernating?

Every so often one of us would cry out, “Look towards 2 pm!” and all of our heads turned that direction. With binoculars and the camera zoom lens we pulled the blob in question closer, only to learn that it was a rounded boulder, not a bear.

“There!” Yanni said, triumphantly, and pointed to a ptarmigan sitting on the side of the road. And while we should have given Alaska’s state bird its due credit, we had seen so many of them in the course of our years in Alaska that the sighting fell short of our expectations.

Further down the road we spotted a duck floating on a tundra lake.  “A bufflehead!” Wes exclaimed as he identified the waterfowl, tapping into his past experiences duck hunting. The kids yawned.

When we reached the Teklanika river, our turn around point, we still had not seen any wildlife. To cheer ourselves up, we picnicked on egg salad sandwiches and artichoke dip and pretzels. Immediately, our mood lifted. Even the kids agreed to go on a shorter hike down to the glacially fed, silty grey water of the Teklanika River. The wind picked up considerably as we started off, whipping about us unpleasantly. Our clothing was no match. Luckily, Tara had packed in most of her winter gear – parka, headscarves, hats – which she started to distribute to the rest of us. Thus clad, we walked briskly down to the river, took in the spectacular view and shot some photos of ourselves for documentation before hurrying back to the car.

Once again, we peered out of our windows. Hope was slowly dissipating.

“Are there any dinosaurs on this dinosaur tour?”

“I bet the folks on the sightseeing buses are having better luck,” someone suggested. “The bus drivers give each other hand signals when they pass each other on the road when they’ve spotted wildlife.”

“This day is a zero!” one of the kids decided.

Slowly we drove back, skirting potholes and bumping over the gravel road. Helen’s head started to bob, drowsed by the slow rumble of the car’s engine. At least the landscape, even without animals, was an enchanting sight, well worth the drive.

Suddenly, around a high bend in the road that overlooked the Savage River, we spotted caribou. We had come almost all the way back to our entry point and there they stood, a group of five, in full view. Captivated, we watched as they moved slowly across the tundra towards us.

We counted five, then ten, then twenty. All throughout the sweeping valley, they dotted the landscape. It was as though they had always been there, foraging on lichen and willow leaves. They migrated hundreds of miles, spreading their grazing so they would always find adequate food. Ironically, it had taken us all day, searching for something that was right in front of us. We did not need our road permit after all, we slowly realized.  Encountering caribou on their own land was a privilege not because we sought them out, but because they granted us the sight of them. 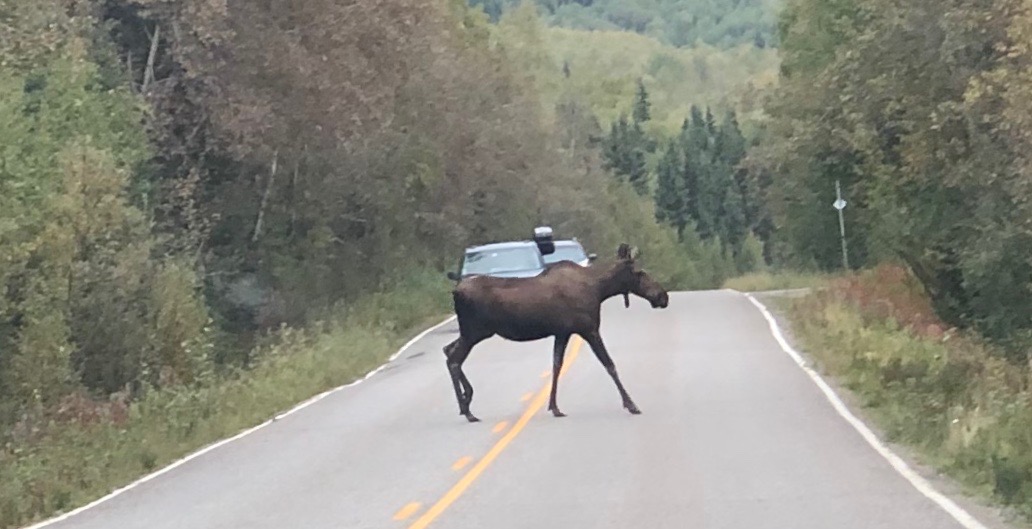 Autumn and I breathe a sigh of relief.  Time slows, evenings lengthen. Whatever summer activities, multiplied and frenzied beneath a midnight sun, slowly wean themselves in the tempered days of fall.  I have hiked the trails – Chena Dome and Angel Rocks and Rock River Trail.  The Tanana Valley State Fair came and went, with rides and Polish dogs and Cajun shrimp.  Flowers and vegetables have been coaxed to unimaginable heights in the almost continuous daylight.  The seafood freezer is full, crammed with salmon dip-netted from the Chitina River and halibut from Katchemak Bay. Summer visitors have left, taking home with them images of floating down the rivers, eating crabcakes at the Pump House, and of Denali National Park. And I can settle, glad for the quieter seasons to come, with days eased to a slower tempo, when a moose crossing the road is the only traffic jam in my day.