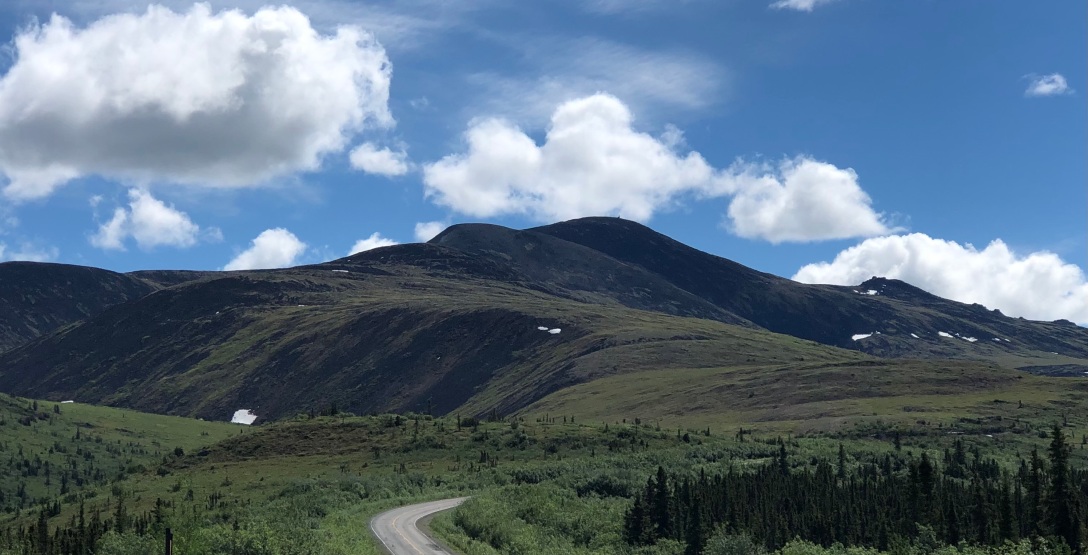 Our trip literally took us to the top of the world. I have lived in Alaska for twenty years but had never been to Chicken. I heard about this tiny community, near the Canadian border, halfway between the Tok River and the Yukon River. The road that led there was sparsely travelled, partly because the Canadian border was closed due to a new outbreak of the pandemic in Dawson City. We took the advice given to us, carried an extra water supply and filled our gas tank before we started. We should be prepared to be on our own. Alaska’s inherent social distancing this year allowed us to be tourists in our own state.

The road climbed to great heights and vistas. The northern terrain unfolded in a succession of ridges, in varying shades of grey and green. The fireweed alongside the road was blooming but on the higher slopes of Mount Fairplay snow still lay in patches.

We were in Fortymile River country, named such because the river merged with the Yukon forty miles below Fort Reliance, an abandoned trading post. It was rich goldmining country. As we passed the tributaries and creeks – Logging Cabin Creek and West Fork and Dennison Fork -with water rushing and clear, we could imagine early prospectors drawn to them as a source of hidden gold.

The terrain was also home to the famous Fortymile caribou herd, the largest herd of caribou in Alaska. Their migration followed the seasons. In the Spring they moved to treeless ridges to bear calves. They spent the summer on the alpine tundra, where breezes relieved them from the torment of insects. With the arrival of snow, they sought shelter in the lowlands, using their keen sense of smell to paw through the deep snow to feed on lichen. Every fall, the caribou crossed the very road we were travelling.

Chicken was tiny. It began as a gold mining camp at the turn of the century, but its inhabitants still continue to suction dredge in the Mosquito Fork for the much sought-after metal. An old gold dredge still stands tall. Some pan for gold the old-fashioned way, scooping river sediment into pans and sifting it until the sludge separates from the gold. A gold clean-up table attested to this. It was almost as though time stopped still.

Amused, we took in the sight. Downtown Chicken consisted of a café, a liquor store and a gift shop. We struck up a conversation with the young man that ran all three establishments simultaneously. He told us that his father was a trapper before he and his mother settled in Chicken. When his mother went into labor, she almost gave birth to him on a bush plane en route to Fairbanks. The same plane delivered mail twice a week, landing on a precariously narrow landing strip. There were no telephones. No overnight accommodations. No flush toilets. In the winter, when the temperatures reached 700 below, the road to Chicken closed.

“You just missed Chickenstock last weekend,” our new friend told us. “It was like the wild, wild West out here!”

The folk music festival, Chicken’s proud claim to fame, was organized once a year by the owners of the lonely settlement. It drew in an eclectic crowd of people from all over interior Alaska, who proceeded to pitch up tents on the hillsides and park campers near the river. Bluegrass musicians took to the stage. Overnight, the typical population of Chicken rose from 15 to over 1500.

Just before leaving we could not resist taking a photo next to the community’s namesake statue. A giant chicken. There have been other places named after the farm fowl: Rooster Rock in Oregon, Clucker’s Hall in Illinois, Chicken Scratch in North Carolina, Hatch in New Mexico. The acquisition of the name of Chicken in Alaska made us smile. Evidently, the original gold mining settlers came across plenty of ptarmigans in the area. Not knowing how to spell the name of Alaska’s state bird, they opted for the easily pronounced “chicken” instead.