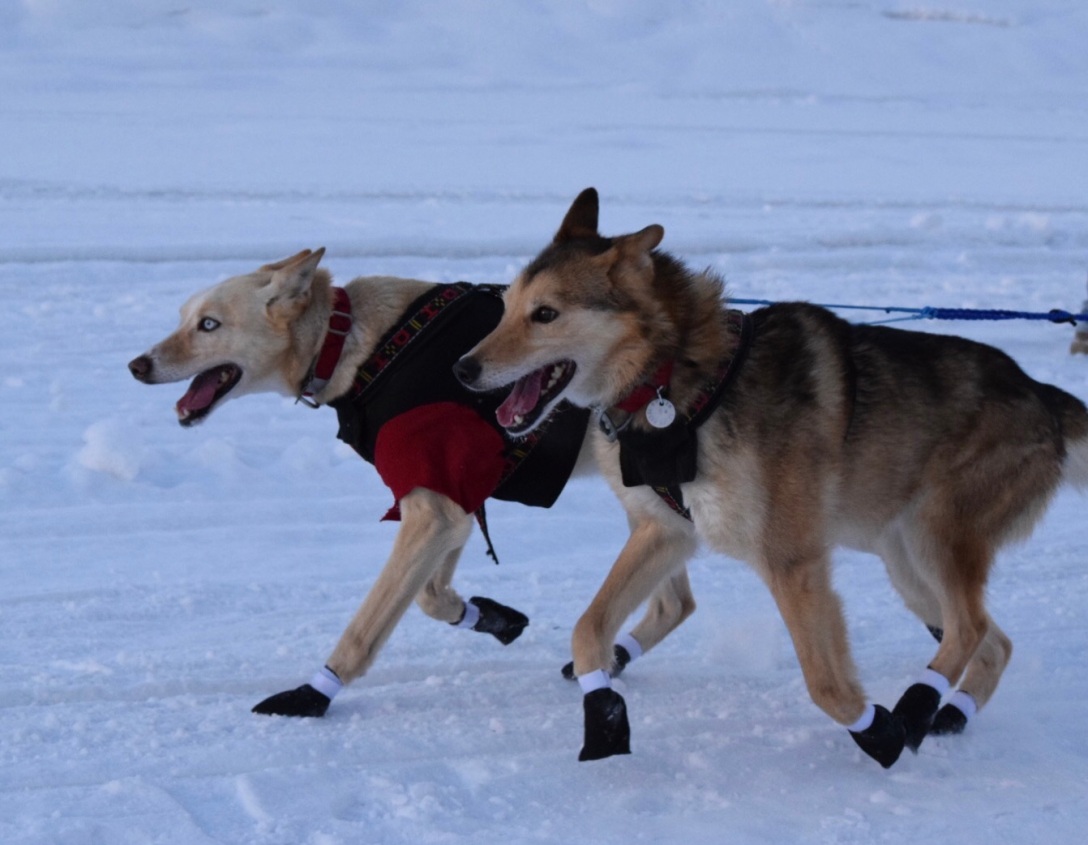 On a crisp, sunny Saturday the Summit Quest 300 race started in Pleasant Valley. February typically marks the start of the dog mushing races in Alaska. Temperatures hovered well below zero, but the chill did not stop the dogs. Eager to be on their way, they jumped and janked at their harnesses. Dog handlers restrained them with effort, preventing them from bounding down the trail prematurely. The dogs’ barking and breath clouded the frigid air. They were surprisingly small in stature yet unsurpassed in stamina and knew neither trepidation nor doubt. The broad, untamed winter wilderness beckoned. The challenge was on.

Their energy was magnetic. I felt my own breathlessness, a fast pulse in my throat as I watched them run through the start chute. The gathered spectators cheered them on. They left at regular intervals, in teams of eight or ten or twelve. Their musher, standing behind them on the sled as they hissed by, raised a parting hand in greeting and in pride. Beyond us, they were on their own in the wilderness, left to their own devices and skill.

The race was adapted due to the pandemic that has reached even the hinterlands of Alaska. Typically, the Yukon Quest traces a route from Fairbanks to Whitehorse, a distance of a thousand miles, following the historical trail of the Goldrush route. This year, with Canada’s border closed due to the pandemic, efforts were made to skirt and safeguard northern villages. While somewhat shorter in distance and contained within Alaska, the Summit Quest 300 proved to be no less impressive.

Mushers and dogs were tested to the extreme. The ascent was in front of them. For some veteran mushers, after a lifetime of successful runs and stories from the trail, this season was to be their last. Would they look back wistfully after a final run? There were “rookies,” new to the race, ready to take on the inhospitable northern landscape and the blackness of subzero nights with a young dog team. Perhaps they wavered in their decision to take on challenge, as they prepared their sleds and dropped dog food at checkpoints, when they heard the weather report of temperatures that would plummet to 40 below in the night. Would they have conversed with the seasoned mushers before the race, absorbing suggestions and a thimble of encouragement? Watch for frozen tundra hillocks and the glare of river ice on Birch Creek. It can disorient the dogs. Be sure to give them the mandatory rest at mile 101. Try doing squats on the sled to keep warm. And don’t forget to look for the northern lights. They are awesome this time of year! The newcomers, shifting again, smiled in return. Mushers and dogs, old and new, were all in this race together.

For many miles they would run, challenged by jumbled ice on the creek and a windswept trail that could easily mislead in inclement weather. There were two summits to overcome. Rosebud was said to be long and steep. Eagle Summit was well known for its treacherous descent. They would run for hours, left to their own devices, before reaching a checkpoint at Two Rivers and Circle and Central. Stopping to rest, mushers would feed their dogs a mixture of beef or high protein kibble or salmon before bedding them down on straw. They would take off booties, apply ointment, run their hands over paws. They would check in with vets to assess heartrates and hydration. Only after the dogs were attended to would the musher eat his or her own food and try to take a quick nap.

Running again, at times it felt as though they were the only ones out there, miniscule in a huge, unrelenting landscape. They would think of the other dog teams on the trail, all on a similar quest, even as they ran their own race. And when they reached the finish line with an expanded feeling in their chest, they would know that even after many miles on their own, they were all connected in the great race of the north.